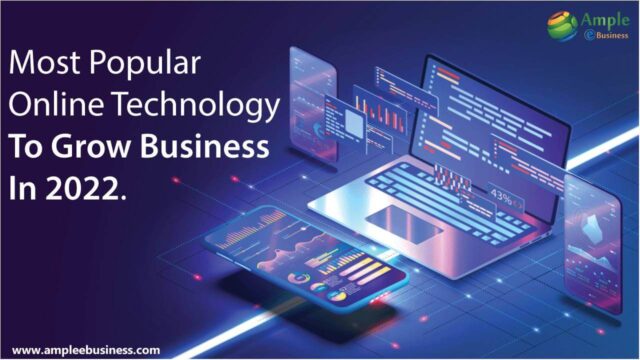 In today’s technologically savvy world, everyone understands that technology is always evolving. Seeing rival technologies constantly outpace one other in terms of improvements and upgrades has become commonplace.

In the middle of all of this, one area is particularly vulnerable to the ups and downs of the computer industry: programming languages!

Almost every field, including web development, and data science, requires proficiency in some form of a programming language as a foundation. Even at Ample eBusiness, our best web developers are equipped with such emerging technologies. Every year, the popularity of these programming languages rises and falls in the rankings, which are updated based on developer demand.

Programming Language trends and indexes must be kept up to date to be relevant in the IT industry. And we, at Ample eBusiness, as a top web development firm, can vouch for this. Before settling on a programming language, newcomers should carefully weigh the pros and disadvantages of demand and popularity, career changes, and other factors.

As far as programming languages go, Python has long been a popular choice. Many software engineers, particularly those in the fields of machine learning, choose it because it is both easy to learn and adaptable. For its simplicity and clarity, the open-source programming language will remain popular in 2022.

Python’s dominance as the most popular programming language of this generation will only grow over the next several years. Even professionals who don’t want to memorise a slew of functions or keywords may benefit from the elegant yet easy syntax, which makes learning a whole new level easier than ever before.

In my opinion, Python is the finest programming language for both novices and specialists. Since it’s simple yet powerful, you may use it in a variety of domains, such as deep learning databases, machine learning (ML), scientific data analysis, and statistical computing.

Now is the time to gather your development team and begin incorporating these technologies so that you can get started right away in 2022. Visit Ample eBusiness today.

LiveScript was the original name given to Javascript when it was first developed in 1995. It was marketed as the “younger brother” of Java at the time since it was so popular. Over time, JavaScript grew into a stand-alone language. Although JavaScript and Java share certain similarities, they are two separate programming languages.

In the corporate application sector, Java is a major server-side language that is in great demand for applications requiring scalability and consistency. Like startups, agile application development teams rely on solutions like Python and Node.js.

For a successful career in server-side Java, you must also be familiar with frameworks like Spring. Though the core services are written in other languages, almost every corporation has some crucial Java services operating.

Scala is utilised by digital titans like Netflix, Linked In, and eBay for a variety of platforms and enterprises. Scala is an excellent choice for newcomers because of its ease of use and low barrier to entry. Scala was created to address issues that Java programmers were encountering while using Scala.

Its sluggish computational speed, string interpolation, and excellent scalability are only a few of Scala’s numerous distinguishing qualities, among others. Code written in Scala may also be executed on the Java virtual machine by translating it to bytecode. Web development and machine learning all make frequent use of the language.

Dart is one of the fastest-growing languages in the industrial sector. As Microsoft’s TypeScript gains in popularity, Google’s interest in linguistics has also expanded dramatically over the past few years. Because of its simplicity, Dart is beloved by computer programmers all around the world.

Multi-platform apps may be built with Dart. Dart, like JavaScript, is the most widely used programming language for creating universally accessible software that can be utilised on any electronic device. Flutter is a framework for building mobile apps, and Dart is presently part of it. Flutter, despite being a newer framework, is significantly more popular than React Native, which is currently in use in the market, according to recent Google developments.

In comparison to JavaScript, Dart is a lot easier to learn and understand. Currently, programmers may choose between TypeScript and Dart, both of which are widely available.

Go is the programming language of choice for companies like Uber and Google. Static typing and a C-like syntax characterise Go, Google’s new programming language. Many basic difficulties, like sluggish compilation, a lack of a big standard library, and so on, maybe solved by the language.

Now is the time to gather your development team and begin incorporating these technologies so that you can get started right away in 2022. Visit Ample eBusiness today.

Many data processing systems, such as Hadoop and Spark, may be integrated with it. Because of its cross-platform interoperability and robust graphical features, it is a popular language among programmers.

Swift is an open-source programming language that supports nearly everything Objective-C does. Swift is easier to learn than other programming languages and can be utilised with IBM Swift Sandbox and Bluemix. Popular iOS apps like WordPress and even Flappy Bird all employ Swift. The average yearly salary for iOS app developers is roughly $96,000.

As a result, in 2022 and beyond, there are a number of top programming languages available. Python, JavaScript, Java Go, Swift, R, Dart, and Scala are just a few examples. Even ten years from now, developers will still choose some programming languages over others because of their unique benefits. Now is the time to gather your development team and begin incorporating these technologies so that you can get started right away in 2022. Visit Ample eBusiness today.