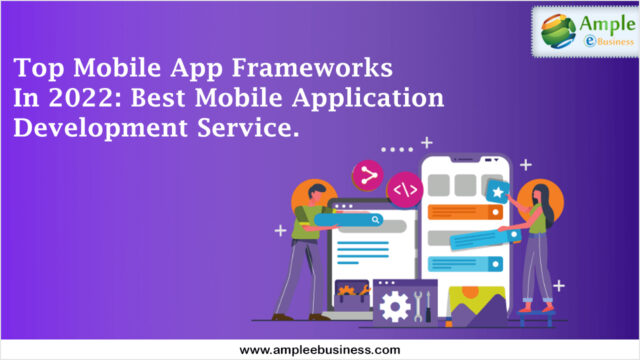 Whether you already have a mobile app or are intending to launch a new one, you need to do thorough research, devise a strategy, and analyse the current mobile environment in order to succeed in an increasingly competitive digital marketplace.

There is a slew of frameworks for building mobile apps, but we’ll only cover the best of the bunch!

Even while native applications are costly to build and maintain, they give an unrivalled experience in terms of both appearance and functionality. In such situations, Mobile application development services are useful and come in handy.

Businesses are able to use top Mobile application development programs like Ample eBusiness to develop a web, hybrid, or perhaps cross-platform mobile app for a price.

Due to the wide range of channels and devices available, achieving the maximum level of client engagement is difficult with native applications.

What is a Mobile App Framework?

Mobile apps would be the best choice for gaining new clients. There are usually new app ideas. You will find various app development frameworks for both Android and iOS. You do not have to know other things to create a site. A mobile application framework contains software and tools.

Everything worked out in favor of software development companies. And top Mobile application development services like Ample eBusiness can help you with choosing and implementing the top mobile app frameworks.

The Top Mobile application development services like Ample eBusiness and their Developers then utilize these features to build a foundation for a mobile application that works on multiple devices.

Listed below are some of the most recent frameworks for developing mobile apps. Both Android and iOS users can integrate these frameworks to create beautiful apps.

Flutter is an open-sourced framework for generating native apps for both iPad and also the Android platform.

It’s a smartphone UI framework that’s unmatched in its ability to speed up the creation of visually appealing applications.

Developers can use Flutter to create and deliver stunning mobile apps since it is an all-in-one framework that includes everything they need. Many well-known companies, such as Google and Abbey Road Studios, have adopted Flutter.

● The development will be faster.
● Cross-platform.
● Aesthetics that pique interest and keep viewers interested.
● Performance that is close to that of a native application.

Android and iOS mobile apps or any other app type may be developed with React Native. React Native apps from well-known companies like Tesla, Airbnb, Skype, and Amazon Prime are some of the best examples available.

React Native’s main selling point is that it allows for more rapid development and implementation.

Do-it-yourself platform Swiftic is designed to allow anybody to create their own mobile apps for their business. It reduces the time and effort required to create new apps by letting developers use existing content from the Internet instead of beginning from scratch.

● With a 30-day money-back guarantee, these courses.
● Navigating and interacting with the system is a breeze.
● Intense cooperation with other groups is evident.

It is a cross-platform mobile app development framework that facilitates the construction of explicit platform-agnostic apps. This framework can be used to produce versatile websites which could operate on a range of devices.

Web and mobile app themes may be easily customized using jQuery’s HTML5-based framework and Theme Roller. It’s possible to get jQuery Mobile in both a bespoke framework and a more stable version.

● PhoneGap and other mobile app development frameworks are compatible with it.
● The capacity is restricted.
● Compatibility with PI is easy and complete.

Cross-platform app development framework Xamarin may be used to build apps for Android and iOS. As a result of their usage of C#, the apps need fewer lines of code to implement.

As a consequence, the coding process is streamlined. The scripts may also be easily transferred to other platforms, such as Windows and macOS, thanks to this technology.

Efficiency and quality are found in the native capabilities of Xamarin based applications. Its integration with MicrosoftVisual Studio is a huge bonus.

Xamarin-primarily based applications, on the alternative hand, have local abilities in exceptional performance. In phrases of app improvement control and productivity, its integration with Microsoft Visual Studio is a huge bonus.

Core system code and standard code are linked through an intermediary layer in Xamarin. An API-rich environment may be built by programmers with the help of open-source frameworks and computer languages supported by a vibrant developer community.

PWAs (Progressive Web Apps), hybrid, and cross-platform mobile apps may all be built using the Ionic framework. Programmers may use Ionic to construct Android and iOS apps that function perfectly together thanks to Apache Cordova (PhoneGap) and Angular.

Programmers may use a wide range of UI components, including filters, inputs, views, simple navigation and actions sheets in Ionic’s application framework.

● Developing apps for a variety of platforms.
● There is a uniformity to the user interface.
● Improved efficiency.
● The flexibility of the user

Among Apache Cordova’s most notable features are a single codebase and a third-party application management tool. Top Mobile application development services like Ample eBusiness can help you with these services.

Modern mobile app development frameworks have built-in advantages like speed, a bug-free environment, and efficiency. The framework uses pre-built parts to show the application on the device.

When working with a mobile app development business, the corporation may benefit from its knowledge in creating fast, responsive, and user-friendly mobile apps.

previous
How can a global web design company help in website maintenance
next
Top IT Solutions Trends in Web Development in 2022
+91-7415538151
info@ampleebusiness.com
www.ampleebusiness.com